“My name is Jacqueline Williams, and I am regular as all hell.” Ever feel like you should be doing more with your life? Jacqueline did. So, through a series of twists and turns, she did something about it.

Jacqueline Williams is the co-founder and executive director of The Michigan Prison Doula Initiative, a nonprofit organization that offers support and advocacy for pregnant women in prison and their families.

You can make a tax-deductible donation to this amazing organization and directly support pregnant women in prison by visiting https://momsbeyondbars.org/donate/.

My name is Jacqueline Williams, and I am regular as all hell. I am white, thirties, divorced, privileged. One kid (three, blonde), and one dog (eight, pitbull). I live with my mother in Southeast Michigan — just outside of Ypsilanti, where the only women’s prison in the state sits along a shady stretch of road, tucked back so neatly that most folks have no idea it’s there.

Until three years ago, I had no idea it was there.

Let me fast track you through this:

In 2014, I was working at a brewery in Ypsilanti, living in an apartment next to a liquor store with bulletproof glass. In the spring, I met a man who by late summer, I would marry. We were the same age, both fresh off long trips overseas — him to India, me to Southeast Asia — and we met in a park beneath a tree where he was doing yoga and I was walking my dog. We went out the next week and never spent another day apart until we wed. By October, I was pregnant.

I had my daughter at 28 on my mother’s bed, surrounded by a midwife and two doulas, my then-husband, mother and best friend. Soft music played beneath low lights; I moaned, yelled and pulled on things and, in general, did what women have done for several hundred years to get a baby out.

Then she was there, and I fell — supported, held — into the arms and care of people around me. I slept in the bed with my infant for days while people around me washed my clothes and brought me meals. I nursed, bonded, loved and was loved. Still, when I talked about it for months afterwards, I would say: “That was the hardest thing I have ever done.”

We bought a small house and started a little farm. Rather quickly, things fell apart.

No need to place blame; in the five months we’d known each other before getting married, we just hadn’t found out quite enough about each other. There were money problems, parenting problems, physical ailments that sent us spiraling backwards into disparate ideologies — he wanted to rub essential oils on things and I wanted MRIs and cat scans. Who’s to say who was right?

Somewhere in the midst of all of this, we learned about the protest against the Dakota Access Pipeline. It felt too big and too important to just read about. Within a week, I held a donation drive at the brewery and we packed a trailer, drove a truck into the middle of the North Dakota prairie and set up camp amidst the gathering of tribes and allies.

I worked in the school, set up a kitchen in the yurt village, and with my own baby strapped to the front of me, I made soup and ginger tea for the pregnant women. When the weather turned into some small apocalypse we drove our daughter home to my mother and turned back around to finish what we’d started. By the time we got back, there were blizzards weekly and still, pregnant women hunkered down in yurts and teepees. I washed their clothes and brought them meals. Attending these women, my body screaming for my own daughter hundreds of miles back east — that became the new hardest thing I had ever done.

When we got home, our marriage was over. The stress and adrenaline, the trauma of Standing Rock was too much for something already so fragile. We came home in December, and by February, I’d moved out.

In February, I also learned that one of the babies we’d been waiting for, putting all of our hope into during those horrible wind-rattled nights on the prairie, died the day before she was due. I flew to Minnesota to be with her mother. We were still shaken, raw from the psychological warfare we’d endured; we sobbed and drank wine and mourned everything we had lost there. Donald Trump had been inaugurated two weeks before, the pipeline was being drilled beneath the river as we spoke, and both of our marriages were in tatters.

Driving to her daughter’s funeral, I asked if she knew the cause and she said: “Wisdom. Her ancient wisdom saw a picture of what this world looks like for a small brown girl and she chose not to participate.”

Something inside me snapped when she said that; the fragile hold I had on the status quo slipped from my fingers.

For that, I will slow us down.

There are moments in life that scream blatant wisdoms — the icy night I crashed my car into a rock after two whiskeys, being one — and moments that feel more subtle, a gentle shifting axis. The previous two years had contained episodes of both. And the wisdom was starting to emerge and take shape from my time on the frozen prairie, when I stood for something, really stood for something for the first time in my life. I realized I was capable of things I could not have imagined. That I could detonate things where I found them, or build the energy of life’s atrocities and joys into something bigger than myself.

I chose to do the latter.

I started researching. I poured myself into learning about the most vulnerable birthing populations in the country, and it didn’t take long to figure out who had it the worst. Women who are pregnant in prison experience some of the most horrifying traumas you can imagine, and the numbers of them continue to grow by leaps and bounds every year. It’s hard to say exactly how many because data on prisoners is limited, but it’s estimated that, including jails and detention centers, the number of pregnant prisoners in the U.S. reaches 36,000 annually.

Your browser does not support iframes.

I dug in. I read every research article and newspaper article, bought cheap tickets and flew to states with better programs and care, and found that Michigan didn’t have special visiting programs, labor support for women, access to good nutrition, breastfeeding accommodations or adequate mental health counseling. We still shackled our women immediately before and after labor. Let me say that again: In Michigan prisons, pregnant women are shackled at arms, ankles and belly immediately before and after active labor.

I googled where this was happening, what women’s prisons were in the state and how far away they must be for me to never know such things. I found what I was looking for and gasped: There is only one. It is in my town.

I started looking up policy directives and contacting the local prisoner advocates in my area. I found a nonprofit which communicated directly with prisoners and started volunteering two days a week. I was living with my mom, my daughter was attending her daycare for free (privilege again, let me be clear) and I was bartending three nights a week.

It was a grind, but I kept pushing. Through one prisoner advocacy nonprofit, I wrote to women inside prison walls to ask them what they lacked, what they wanted, and what they were afraid of.

I met people edging on these same ideas and we formed the team that would become The Michigan Prison Doula Initiative. We developed a program model for a nonprofit which included education, counseling, and labor support. We wrote by-laws, became a 501(c)(3) federally recognized nonprofit, and started recruiting a board. All the while I was volunteering, learning the ins and outs of the justice system, gathering names like a rolodex and training to become a doula. A year in, I became the manager of the full-time side-job restaurant, then the general manager.

In my free time I wrote 10 thousand emails, to universities and the Michigan Department of Corrections (MDOC), to everyone I could think of, and I pushed until I felt rubbed raw from the friction. I got ulcers and barely slept. Finally, two years in, we had a proposal written, and landed a pitch meeting. In front of me at the meeting were three doctors who oversee healthcare for 39,000 people in prison, and on the phone was the director of MDOC, boss to 44,000. I wore a nice skirt and stabbed a pencil into my leg above the knee at random intervals to keep calm.

Two months later, we got word that we were approved, in full. I quit my restaurant job. We start work this month (January 2019), after the final contract negotiations are signed.

Sometimes I still can’t believe it. We built something out of nothing, out of an idea. I take personal pride at this something good that could not have existed if not for me. Like my daughter, but for the world.

And so the grind continues. Sometimes I ask myself, late at night when I haven’t gotten a good night’s sleep in weeks and I have spent all day in meetings begging for dollars — what am I trying to prove?

It’s pretty simple, though. I believe in humanity, and I found a way to help uplift it. I know that we will not get this exactly right at each step, and I have a lot of learning to do. But I think the important thing is that I am willing to listen — to both the world’s wisdom when it tells me that I am not where I need to be, and the people around me who are willing to help me get there. 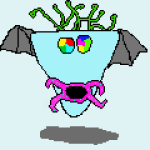